Shares of Netflix (NFLX ) have soared over 55% since Christmas, to crush Facebook (FB ) , Amazon (AMZN ) , and its other FAANG peers. Despite this impressive resurgence, NFLX stock rests roughly 15% below its 52-week high. This means now might be time for some investors to think about buying Netflix stock at a discount while they still can.

Netflix’s Q4 revenue came up just short of our Zacks Consensus Estimate, but beat our adjusted earnings estimate. More importantly, Netflix added 8.84 million new paying members in the quarter to blow past its own quarterly estimate.

The company did report negative cash flow of $1.3 billion last quarter to bring its full-year total to negative $3 billion. Netflix expects to report a similar level of negative cash flows in 2019 and then “meaningfully improve that trajectory going forward.”

Netflix’s debt load has also worried some Wall Street analysts. But the company has to spend billions on new original content because much richer Amazon is committed to its own streaming platform. And of course, Disney (DIS ) , Apple (AAPL ) , and AT&T (T ) are set to enter the streaming market, not to mention Facebook (FB ) and YouTube (GOOGL ) have continued their original programming efforts.

Luckily, Netflix expects its margins to climb from 10% last year to 13% in 2019 and beyond. Plus, recently appointed CFO Spencer Neumann noted on the company’s earnings call that taking on debt is “the optimal cost of financing and funding to date.” He also said that the goal is to be “self-funding” and “we believe we will do that over time with these content investments.”

As we mentioned at the top, Netflix stock has been on a tear since Christmas. We can also see that Netflix has been the best FAANG performer over the last three years. Plus, shares of Netflix rested over 15% below their 52-week high at $359.07, including Thursday’s 2.08% climb. 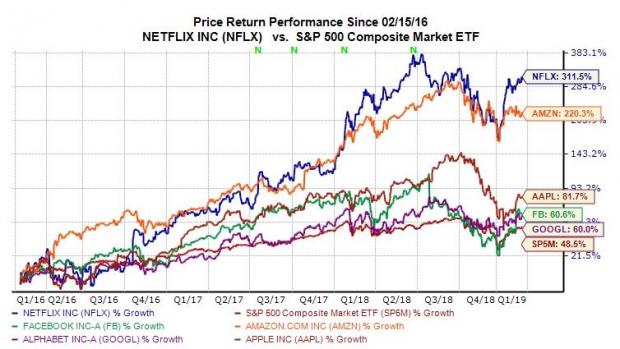 Looking ahead, Netflix expects to add 8.9 million paying subscribers in Q1 2019 to reach 148.16 million. Jumping way ahead, Credit Suisse outline in a note recently why Netflix is expected to more than double its subscriber base over the next 10 years. “The market is embedding that NFLX will achieve 335 million subscribers by 2028,” the note stated.

Netflix’s international expansion will prove key for years to come as the U.S. market grows more saturated and crowded. The streaming service is currently available in over 190 countries, with China the biggest and most lucrative untapped market. Netflix has said that it “continues to explore options for providing the service” in China.

Investors might be even more pleased to see that NFLX’s adjusted earnings are projected to soar 51% in fiscal 2019. Plus, Netflix’s full-year 2020 earnings are expected to soar nearly 60% above our current year estimate.

CEO Reed Hastings said that Netflix currently earns about 10% of total television screen time in the U.S., which is pretty impressive considering this includes streaming services, gaming, and linear TV. Going forward, Netflix is set to roll out more movies and shows that feature A-list Hollywood stars, as well as more unscripted programming.

In the end, it seems hard to believe that Netflix stock won’t at least climb to its previous highs, with the streaming entertainment age really just beginning.