Wall Street analysts expect that Walt Disney Co (NYSE:DIS) will announce sales of $15.90 billion for the current fiscal quarter, according to Zacks Investment Research. Two analysts have issued estimates for Walt Disney’s earnings. The lowest sales estimate is $15.66 billion and the highest is $16.13 billion. Walt Disney posted sales of $14.24 billion in the same quarter last year, which suggests a positive year-over-year growth rate of 11.7%. The business is scheduled to issue its next earnings report on Tuesday, August 14th.

On average, analysts expect that Walt Disney will report full-year sales of $59.78 billion for the current fiscal year, with estimates ranging from $59.34 billion to $60.54 billion. For the next financial year, analysts anticipate that the company will post sales of $61.61 billion per share, with estimates ranging from $60.56 billion to $63.02 billion. Zacks Investment Research’s sales calculations are a mean average based on a survey of analysts that cover Walt Disney.

Walt Disney (NYSE:DIS) last issued its quarterly earnings data on Tuesday, May 8th. The entertainment giant reported $1.84 EPS for the quarter, beating the Thomson Reuters’ consensus estimate of $1.70 by $0.14. The business had revenue of $14.55 billion during the quarter, compared to the consensus estimate of $14.11 billion. Walt Disney had a net margin of 20.16% and a return on equity of 21.13%. The firm’s revenue was up 9.1% compared to the same quarter last year. During the same quarter in the prior year, the firm earned $1.50 EPS.

The company also recently announced a semiannual dividend, which will be paid on Thursday, July 26th. Investors of record on Monday, July 9th will be paid a dividend of $0.84 per share. This represents a yield of 1.62%. The ex-dividend date of this dividend is Friday, July 6th. This is an increase from Walt Disney’s previous semiannual dividend of $0.78. Walt Disney’s dividend payout ratio (DPR) is currently 29.47%.

The Walt Disney Company, together with its subsidiaries, operates as an entertainment company worldwide. The company's Media Networks segment operates cable programming services under the brand ESPN, Disney, and Freeform; broadcast businesses, which include the ABC TV Network and eight owned television stations; radio businesses consisting of the ESPN Radio network; and the Radio Disney network. 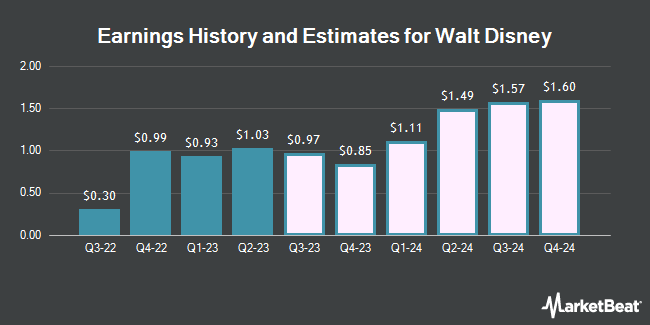