Clearly something has happened.

Back in June, West Texas Intermediate crude was at $44 per barrel and seemingly headed lower. Five months later here we are at $58 per barrel — a 31% increase.

That is a pretty big move and a huge boost to cash flows of oil producers across the globe. 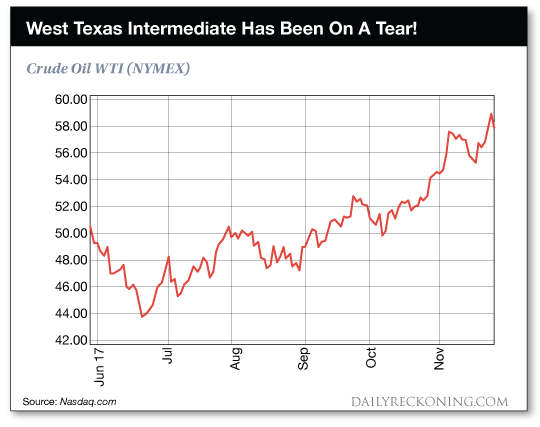 So what happened? Why has the oil market suddenly come back to life?

Rather than speculate, let’s take a look at the data

I’ll admit it. I’m as guilty as the next guy about getting excited about the electric car. Ten years ago I didn’t expect to see a serious level of electric car usage in my lifetime.


Maybe, but the electric certainly has no impact on the global thirst for oil in 2017.

In fact global oil consumption has been growing very rapidly. Over the past three years daily oil demand has posted increases as follows:

2017: Global oil demand will have increased by 1.6 million barrels per day


For some perspective the significance of a 5.2 million per day demand increase, consider that growth basically consumes 100 percent of the entire daily production from U.S. shale oil.1

An extra 5.2 million barrels per day of oil demand consumes 1.89 billion barrels more oil per year than what was being used in 2014 before oil prices crashed.

No sign of the electric car making an impact here!

The Saudis And Russia Have Significantly Curbed Supply

In determining price, demand is only half the story. The other half is supply.

Last December, OPEC and some non-OPEC countries agreed for the first time since 2001 to cut production. OPEC alone had cut production (successfully) in 2008 to shore up oil prices in the wake of the Financial Crisis, but this time the cartel also had some friends agree to help.

Russia and the Saudis are far from being on friendly terms.

Yet here we are a year later and I can confirm for you that these two key parties in the oil production group have followed through on their pledge.


With OPEC and Russia production restricted and no growth from anything other than U.S. shale (which has levelled off) global supply growth has stalled while demand has been surging.

Inventory levels are the most concrete piece of evidence that oil market investors can look to in order to determine how tight the supply/demand situation is.

Particularly, U.S. inventory levels — which are by far the most reliable.

In 2017, those U.S. inventory levels have confirmed that the global oil market has significantly tightened. In my opinion these numbers have been the main driving force behind the rising price of crude.


The chart below tells the story quite clearly. This graphic shows the change in U.S. raw crude inventories between the start of each year and the first week in November for the past 11 years.

Do you notice anything different about 2017? 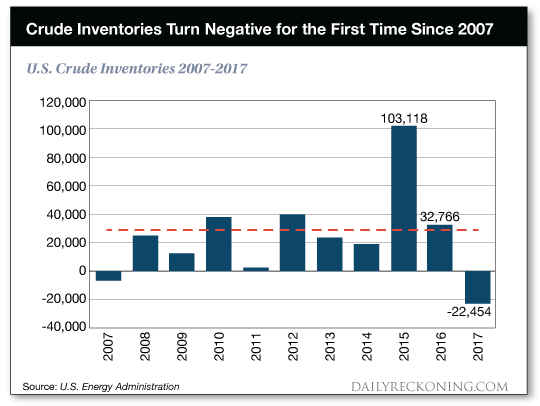 
Globally inventory levels have also been decreasing on the back of steady demand growth and falling supply, but it is the decrease here in the U.S. that has really caught the oil market’s attention.

The Trillion Dollar Question Where Do We Go From Here?

The key determinant of where the price of oil heads over the next year is the will of two men.

Given that oil demand is set to rise by another 1.4 million or so barrels per day next year, if OPEC and Russia keep their production restricted the oil market isn’t going to just remain tight It will get tighter still.

I believe that the Saudi Aramco IPO, which is scheduled for 2018, is a huge motivation for the Saudi Prince to keep pushing oil prices higher. What Mr. Putin is inclined to do is not something that my crystal ball has an opinion on.

If they simply do nothing and keep their respective production levels where they are, I believe oil prices are going to continue to trend higher.

If that is what happens, it will be interesting to see how high these gentlemen will be willing to let them go.

Keep looking through the windshield,