Shares of Axis Bank witnessed extreme movements in morning trade as the scrip recovered from 3 percent lows to be trading over 5.5 percent higher. Experts were anticipating a lower opening on the back of its dismal performance in the March quarter.

Among key possibilities for the rise could be attractive valuations along with reportage of a kitchen-sink quarter as well. 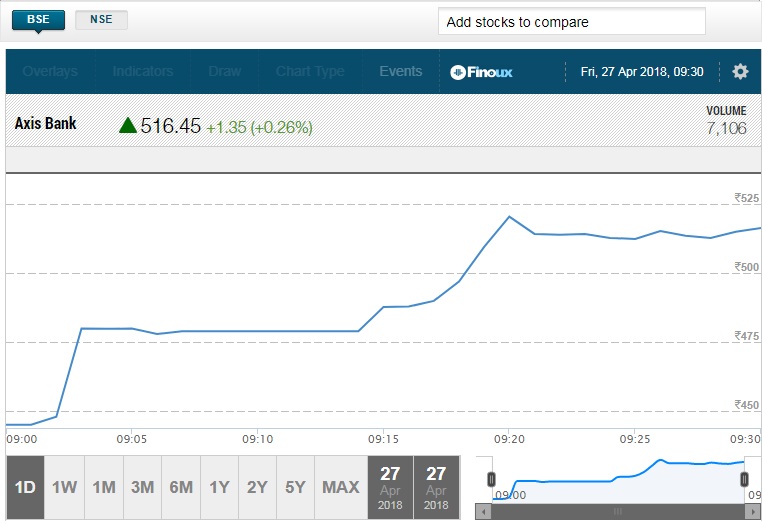 
Sanjiv Bhasin of IIFL highlighted how, after the correction earlier, Axis Bank could become the cheapest corporate bank in terms of valuation.

Axis Bank has managed to deliver a kitchen-sink quarter performance and bring out everything (to the table). These were largely known and hiddenthe way it has happened is disappointing. The stock has corrected about 10-12 percent and has been an underperformer. We will have to wait for a change of regime now, Bhasin, who is EVPMarkets and Corporate Affairs at IIFL, told Moneycontrol.

Speaking on the outlook for the stock one year from now, Bhasin said it is likely to be in a better position. Classification of NPAs has been standardised by the Reserve Bank of India, he said, adding that the road forward looks smoother. On a price to book basis, it is the cheapest corporate bank as well, he said.


The bank on Thursday reported a loss of Rs 2,188. 74 crore for January-March, as against a net profit of Rs 1,225 crore in the same quarter last year.

This is the first ever quarterly loss posted by Axis Bank since it listed over two decades ago.

Slippages for the quarter nearly quadrupled year-on-year to Rs 16,536 crore, with nearly Rs 13,900 crore of new slippages coming from the corporate sector. So more than 80 percent of the slippages were from companies rated ‘BB’ and below.

Analysts polled by Reuters had estimated a decline of 56 percent in net profit to Rs 534 crore, and 4 percent rise in net interest income to Rs 4,909 crore.