The three officials who navigated the United States through the worst financial crisis since the Great Recession warn that policymakers may be forgetting some of the lessons they learned the hard way 10 years ago.

That could make it tougher to manage the next economic crisis.

Former Fed chairman Ben Bernanke and former Treasury secretaries Henry Paulson and Timothy Geithner shared leadership of key institutions during the banking and housing meltdownin 2008 thatthreatened to bring down the global economic system. A decade later, the three mengathered with a dozenreporters at the Brookings Institution in Washington, D.C., to discuss the reforms enacted in its wake andthe ability of the United States today to prevent some new crisis from exacting the financial and human toll that one did.

Some things are clearly better, they said, including tighter federal banking regulationsthat have set higher standards for liquidity and provided emergency powers for the government to intervene in a crisis. But they agreed that the federal budget deficit, exacerbated by last year’s tax-cut bill, will make it harder for the government to respond when the economy inevitably takes a downturn.

They also worried whether the nation’s current state of constant political warfare would allow the sort of bipartisan action that rescued the U.S. economy then, albeit with some bumps, and at a cost.

“The crisis brought out some of the very worst in the American system in terms of our dysfunction, the political functions, the problems with our regulatory system and so on, but at the end, it really brought people together,” said Paulson, who was George W. Bush’s Treasury secretary when the crisis struck.

“I wouldn’t want to dismiss the possibility as an American that if we had another crisis that we couldn’t come together,” he said, not exactly describing that prospect as a sure thing. It was hard then, and it likely would be harder now.

“We're choosing to live with a situation in which things have to get terrible before it becomes politically viable for Congress to legislate the classic set of tools that all countries need to save their economies from panics and depressions.”

“We’re choosing to live with a situation in which things have to get terrible before it becomes politically viable for Congress to legislate the classic set of tools that all countries need to save their economies from panics and depression,” Geithner said. “We have a system where it has to get really scary and bad for you to be more optimistic about the chance to legislate the mix of Keynesian things and emergency powers necessary.”

Federal Reserve officials have recently been criticized by Democrats for proposals to ease bank capital requirements and for lowering the bar on the stress tests that are designed to ensure banks have enough in reserve in a financial crisis.

The signs of trouble in the economy began in 2007 and weren’t under control until well into 2009, Bernanke recalled. But it was during August, September and October of 2008 10 years ago that the most dramatic events occurred and decisions were made. They included the seismic announcement in September 2008 that the financial services firm Lehman Brothers was filing for bankruptcy.

The three men make an odd trio: The professorial Bernanke, now 64, a scholar of the Great Depression, appointed to chair the Fed first by President George W. Bush and then by Obama. The ebullient Paulson, 72, a former chairman of Goldman Sachs and a Republican. And the wiry Geithner, 56, a Democrat. But they have the camaraderie of veterans who fought a war togetherand survived. 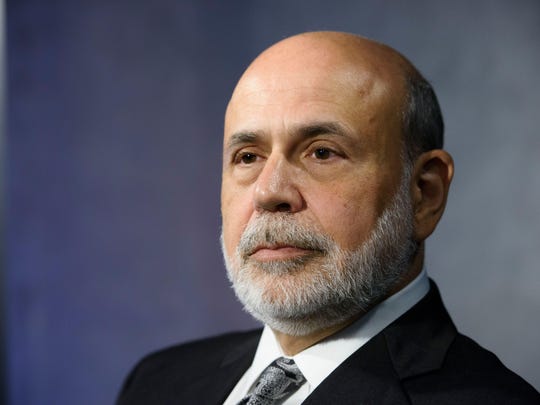 “What we were trying to do was to prevent Armageddon,” Paulson said. “We were looking at a situation where if we felt we had one more big institution go down, it would have taken the whole system down.” As they scrambled to respond, “we were focused on staving off disaster.”

That stands in sharp contrast with today’s upbeat economic news. The unemployment rate has dropped to historic lows, now 4 percent. The Federal Reserve in a report last Friday called the financial system “substantially more resilient than during the decades before the financial crisis.”

But the veterans of the 2008 crisis note that sooner or later, there will be another economic downturn. And they caution that some of the long-term economic trends that contributed to the last one haven’t been effectively addressed.

“Today, when we are growing, this is the time when we need to deal with some of the persistent structural issues that are going to determine our long-term economic competitiveness,” Paulson said. “We have the fiscal deficit, dealing with immigration, the income disparityand what automation and globalization are doing to wages. They need to deal with all those.”

The financial crisis the United States is most certain to face is one over the deficit, he said. “It will slowly strangle us,” he said, undercutting the nation’s ability to fund entitlement programs and to invest in programs that boost the next generation.”It will squeeze out all sorts of things we need to do.”

“You asked about the deficit. If we don't act, that is the most certain fiscal or economic crisis we will have. It will be slow. It will slowly strangle us.”

That said, neither Republicans nor Democrats are now focused on the deficit as a priority. The nonpartisan Congressional Budget Office projects the annual deficit will top $1 trillion in 2020 and the national debt will reach more than $33 trillion in 2028. At that point, the debt will nearly match the size of the overall economy, the highest level since just after World War II and one that risks driving up interest rates and slowing down the economy.

It also would make it more difficult for officials to approve new spending to help the economy pull out of the next recession.

“I think the deficit fever of ’09 through ’13 was mistimed,” Geithner said, reducing the amount of stimulus spending that might have helped turnaround the economy faster.”I say the new complacency about the larger deficits is mistimed, too.”

Emergency powers: Restrictions on some of the powers they used in the wake of the Great Recession create “some concern,” Bernanke said. “It’s important we don’t backslide any further on those powers.” The 2010 Dodd-Frank law put some limits on the Fed’s emergency lending powers and on FDIC bank-loan guarantees.Consumer protections: “The single intent to erode, dramatically erode and scale back the level of consumer protectionis something we’re going to regret as a country,” Geithner said. “We ran the financials of the United States for a long period of time with very weak and very limited protection for the consumer. You get tragic results from that.” The Trump administration has asked Congress to weaken the independence of the Consumer Financial Protection Bureau, a watchdog agency created after the financial crisis.Short memories: “The capital is there and the core is still there,” Paulson said. “The thing that concerns me the most is some of the rhetoric and some of the amnesia in terms of what we went through.”

Ben Bernanke: More execs should have gone to jail for causing Great Recession

Timothy Geithner: On landing a (financial) plane that’s on fire

Former U.S. Treasury Secretary Timothy Geithner spoke about his book, 'Stress Test,' on the financial crisis from his perspective, and he shared what it was like to serve President Bush and President Obama.