A new, well-funded professional wrestling promotion, All Elite Wrestling (AEW), is about to jump into the ring. It’s a clearly ambitious enterprise and, as such, it’ll inevitably come up against the staged sport’s reigning champion, World Wrestling Entertainment (NYSE:WWE).

WWE hasn’t faced any serious competition over the last two decades. Perhaps that will change with the very rapid ascent of AEW. 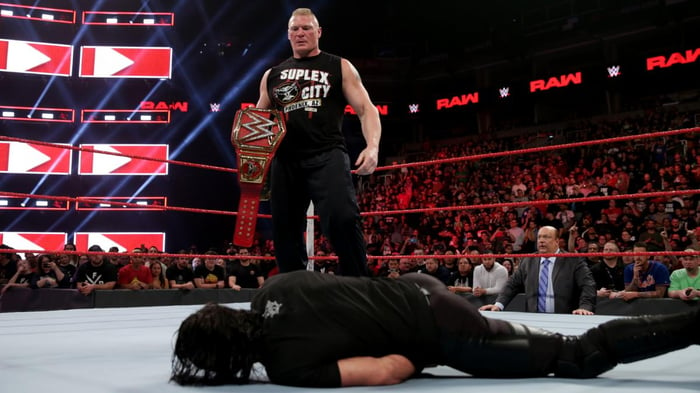 Who will go down in the match between AEW and WWE? Image source: WWE

AEW is basically a collaboration among several pro wrestlers who worked together in independent promotions in Japan and the U.S., and Jacksonville Jaguars billionaire owner Shahid Khan, along with his son, Tony.

This crew has quickly assembled the foundation of a wrestling promotion, naming several top executives and signing more talent. It apparently has a total of 15 wrestlers, male and female, under contract.

AEW has already announced its inaugural event, to be broadcast on pay-per-view: Double or Nothing, to be held in Las Vegas in late May.

So AEW has billionaire money and plenty of experience behind it, plus a talent roster that’s already big enough to fill a pay-per-view card. Does it represent a potential threat to WWE’s business?

Not just yet, and a big reason for this is television. AEW still lacks a TV deal, which is crucial for a promotion that hopes to reach a nationwide audience of any size.

TV is the backbone of WWE’s business — the money it is paid for its Raw and SmackDown Live programs on channels like Comcast’s USA Network is by far its largest single source of revenue.

TV also lit the rocket that shot WWE’s stock price through the roof. In 2018, the company signed a five-year, $1 billion deal with Twenty-First Century Fox (NASDAQ:FOX)(NASDAQ:FOXA) to move SmackDown to Fox Sports later this year. Currently, Comcast’s bill for both shows is $130 million annually. On the news of the Fox deal, WWE shares went skyward and have yet to obey gravity in a meaningful way.

WWE did have a serious, determined, and wealthy competitor in World Championship Wrestling (WCW) back in the late 1990s and early 2000s. Like WWE, WCW was packed with talent and aired on a popular nationwide TV channel (Turner Broadcasting’s TNT). But WWE proved to be a very feisty competitor, amping up the sex and violence aspects of its TV storylines to keep eyeballs on its product.

It ultimately prevailed in the fight, and subsequently bought the rapidly fading WCW for a song in 2001.

King of the hill

Even if we take TV out of the picture, WWE is the company most readily identified with pro wrestling. It also has the biggest stars in its business.

To come close to WWE’s pinnacle position, a new venture would need plenty of time, gobs of money, and a product fresh and compelling enough to be an audience drain for Raw and SmackDown Live. Nobody has managed to do this in over 20 years.

This isn’t to say that AEW can’t achieve that; I’m only suggesting that it’s a tall order, and that WWE has felt the hot breath of major competition before. To be fair, there’s still a lot we don’t yet know about AEW and its presentation; we’ll be better able to gauge its chances when we see the product.

Given what we do know (and WWE’s current powerful position), I don’t feel AEW is ready to take away WWE’s business championship belt.