Amazon will be the latest FANG stock to report earnings with its release after the bell Thursday.

And one market watcher expects the e-commerce leader to knock it out of the park.

“We own this one and we continue to love the growth story,” said Mark Tepper, president of Strategic Wealth Partners, on CNBC’s “Trading Nation” on Wednesday. “The bears always focus on the multiple, the forward P/E which is high … but it’s really not that expensive in terms of its growth.”

Amazon trades at 59 times forward earnings, meaning investors are prepared to pay a high price for its shares on the expectation of future profit growth. The company has been expanding at a fast clip – it has never had a year of single-digit growth.

One factor that Tepper believes should help Amazon continue to deliver is its growth in an exploding industry: cloud computing.

“They’re still the cloud leader to enterprise customers with [Amazon Web Services] and AWS revenues are growing at over 40 percent year over year and that’s their high margin business,” said Tepper. “The potential there is huge and we’re really watching the growth there.”

In its third quarter, AWS revenue increased 46 percent, while operating income grew by 77 percent. The segment makes up around 10 percent of total revenue, according to FactSet estimates.

Amazon’s moves heading into earnings have put it at an interesting inflection point which could mean a breakout, said Craig Johnson, chief market technician at Piper Jaffray. 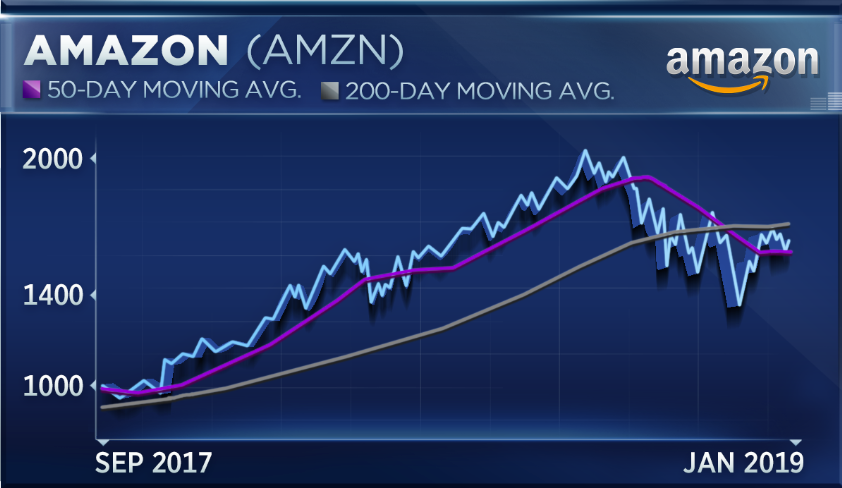 Amazon hit a record high in September before tumbling in December. Since then, it has rallied 30 percent. Johnson said the options market is pricing in a 5 to 6 percent implied move after earnings, suggesting a $100 swing in either direction.

Disclosure: Strategic Wealth Partners has a position in Amazon.