Aegion (AEGN), despite having a very diversified business model, has found itself in a cyclone of various headwinds in recent years. Domestic infrastructure spending has been weak, and the companys diversification into oil and gas all along the process (production, transportation, refining) has had its own fair share of problems.

Given the strong growth outlook off of a weak fiscal 2016 base, fair valuation, and low leverage, the company looks attractive. Based on my estimates, the company has a clear path to a valuation of $32.50/share, or 28% upside. The investment thesis here revolves around a few key themes, most of which look highly likely to play out in fiscal 2018:

Aegion focuses on the maintenance, rehabilitation, and strengthening of infrastructure, with a focus on pipeline infrastructure in all of its facets and forms: wastewater, drinking water, mining, refining, etc. The company started its life in 1971 as Insituform, which built its reputation off of its innovative cured-in-place pipe (CIPP) process which allowed for sewer pipe rehabilitation without digging up the old lines. This technology cut costs by 30% or more versus traditional approaches (dig and fix).

Imagine urban locations where streets, sidewalks, underground utility lines, and driveways all lie above the aged pipe; this eliminates substantial labor and repair costs. To be clear, CIPP isnt the only trenchless method; Aegions CIPP process competes with close-fit sliplining (essentially a new pipe incrementally smaller than the old), shotcrete (sprayed concrete on large applications like sewer mains), and spiral wound pipe. Nonetheless, despite the expiry of patent protection as well, Aegion holds top market share and earns solid margins within the business.

As mentioned, Aegion has evolved from just a play on its CIPP technology, and has diversified into three core operating segments:

Infrastructure Solutions. Primarily serving the municipal water and wastewater markets, using the aforementioned Insituform application, as well Tyfo Fibrwrap (aerospace fiber used to strengthen aging structure) and Fusible PVC (jointless products). Corrosion Protection. This is primarily made up of cathodic protection, pipe linings, coatings, and a services business. Sales are made to upstream and midstream oil customers in oil and gas. Energy Services. General maintenance, turnaround, and construction services at major refiners and petrochemical customers. This is biased towards the West Coast.

Clear themes emerge once you dig into those segments: the legacy CIPP production solution, cathodic protection, and a third-party maintenance business for West Coast refineries. More than two thirds of revenues come from these three businesses and results here have largely been healthy despite some headwinds, but it did take some time for Aegion to get here. In 2014, the firm implemented a restructuring plan, forming reporting segments and exited six loss-producing international CIPP markets.

That continues this year, with the realignment of the Denmark and Australian CIPP markets, as well as non-pipe contract applications of the Tyfo Fibrwrap business ($86mm impairment charge booked in Q3). As part of this, annualized cost reductions are expected to exceed $7mm.

Likewise, the company is expected to generate $4mm in annual savings from the 2017 CIPP business realignment. In other cases, divestitures are being planned, like the outright sale of the pipe coating and insulation assets in Louisiana (expected to close early this year). Payback on all of these initiatives is expected to be quick, with cash costs of $14mm guided but cost reductions in excess of $17mm in the current fiscal year.

Substantially all of operating income currently is generated from non-energy related activity, or basically from the legacy municipal water and wastewater business. In my view, that is where you have to start when analyzing this firm. I think everyone is more than aware at this point that critical infrastructure investment is highly necessary in most locales within the United States, particularly in urban environments.

While bridges, roads, and railways attract a lot of the attention in the press, the Infrastructure Report Card (prepared by the American Society of Civil Engineers) rates this type of infrastructure as being in fundamentally better shape than our water and wastewater connections. With current market consensus being that Trump and the Republican-dominated Congress intend to tackle infrastructure next another relatively easy win after tax reform Aegion looks like an under the radar winner, especially given the backlog is already at all-time highs.

Within a large-scale funding bill, the knee-jerk reaction is to run off and buy firms that rely on new heavy construction more so than the easy maintenance projects wins KBR (KBR), Jacobs Engineering (JEC), Fluor Corporation (FLR) but firms like Aegion wont be left out in the cold and will be less reliant on large-scale contract bid wins to justify future valuations.

There are pockets of concern at first glance that can be explained away. Year to date, adjusted operating income within the Infrastructure Solutions segment (which excludes impact from goodwill and definite-lived intangible impairments, as well as acquisition, divestiture, and restructuring charges) is down to $32mm from $46mm. This ties back to the restructuring of the international CIPP businesses, and the Fyfe North American segment has been performing poorly.

Q3 2017 was relatively flat (off $1mm) which indicates that this headwind seems to be easing. I suspect this will be highly defensible. Aegion has diversified into CIPP alternatives (Fusible PVC in particular is winning share in pipe bursting and sliplining), and while the North American municipal wastewater business is guided to low single digits, the company does have opportunities within pressure piping which is higher growth (mid-single digits) and has less penetration. Orders are up 21% y/y to $527mm, and adjusted operating margins have been trending upward throughout the year.

From 2015 to 2035, the Interstate Natural Gas Association of America (INGAA) projects that natural gas transportation capacity additions will come in between 44-58 Bcfd within the United States and Canada, as well as 5 to 7mm bpd of oil transportation expansion as well. This is driven off the back of, as one might expect, strong growth in domestic shale oil production (left side is the base case, right side is the bull case):

Naturally as pipelines expand, so do the prospects of firms that help build and maintain these assets. Total cash outlay will be more than 550B for this development, or $27B/year, versus the $40B annual rate that was commonplace over the past several years. Most of this growth will come from natural gas and natural gas liquids (NGLs) pipeline expansion, which do use cathodic protection. Generally, cathodic protection is required under US regulations for pipelines, and the business of providing that service is highly fragmented.

There are no real barriers to entry into the market, so companies like Aegion are reliant on scale and operational leverage to earn fair margins. Despite the roll off of large deepwater projects in 2017, backlog remains healthy ($185mm). Continued commercialization of asset integrity management systems, as well as provable success in large projects globally (wind down of $122mm of deepwater Gulf projects, $45mm in Central South America and the Middle East in 2018) will drive revenue higher.

Within Energy Services, Im quite bullish there as well. After moving out of the more volatile upstream business last year (which admittedly might have been premature given the recovery), all that is left is the downstream-directed businesses. Aegion has a strong position within refinery maintenance in California, while also offering a wide range of turnaround and construction services for major refinery owners in the area (Chevron (CVX), Royal Dutch Shell (RDS.A)(RDS.B), Valero (VLO), etc.).

Like is the case across most PADD districts, PADD District 5 (West Coast) has been cranking out refined product as quickly as possible due to wide crack spreads. With refinery utilization rates running at multi-year highs, most refiners have been deferring maintenance as much as possible to take advantage of the current market: 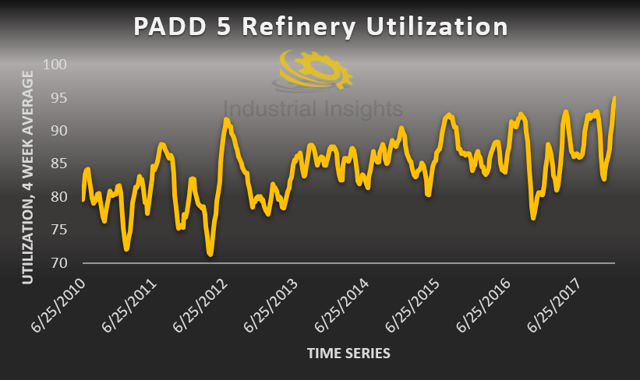 Given the growth in the downstream business versus light capital outlay from refiners and the fact that backlog is up 20% y/y as of Q3 2017, it is clear that most of the gain has been increasing share of overall refinery spending while also maintaining market share in existing businesses. Aegion has leveraged its position in maintenance to get into some construction activity and within turnarounds, and is also in talks with many of its customers to expand into some ancillary businesses as well.

Aegion had $365mm in gross debt (not net of unamortized loan costs) as of the end of Q3 2017, with $315mm of that on the companys Term Loan (due October 2020) and $50mm on its Line of Credit. Net interest costs run about $16mm annual, or 4.3% effective interest rate including commitment fees and other costs of the facility. While these are fixed rate, the company did enter a floating to fixed swap agreement in October of 2015 to hedge the vast portion of the variable interest costs associated with its Term Loan ($263mm in swaps) so increasing LIBOR is only a minor concern.

With my estimate of $1,450mm of revenue and 7.5% adjusted operating margin, Aegion should have no issues generating $109mm in operating income. This is a fairly low hurdle; management is looking for at least 7% adjusted operating margin by 2019, along with 4% revenue growth. Keeping the current $16mm interest expense fixed, 21% tax rate, and 31mm share count (factors in buybacks), Aegion can generate $2.36/share in earnings, or $148mm in EBITDA.

At 9x EBITDA, that justifies a $1,332mm enterprise value, or $1,064mm market cap if the capital structure stays the same. That gives 28% upside to the current share prices, and its a conservative valuation if the company executes. Risks impacting margin expansion are the primary risk in my view, with the Corrosion Protection segment the most questionable. Cathodic protection has not been proven out as a sustainable profit generator, and itll need some real work from management to get it there.

Thank you for reading this Seeking Alpha PRO article. PRO members received early access to this article and get exclusive access to Seeking Alpha’s best ideas. Sign up or learn more about PRO here.

Note: Subscribers at Value Investors Edge, as well as my own service Industrial Insights, received an early look at this research. Consider joining two of Seeking Alphas premier services to unlock access to valuable investment analysis that is not publicly available.

About this article:ExpandAuthor payment: Seeking Alpha pays for exclusive articles. Payment calculations are based on a combination of coverage area, popularity and quality.Tagged: Investing Ideas, Long Ideas, Industrial Goods, Heavy Construction, Editors’ Picks, PROWant to share your opinion on this article? Add a comment.Disagree with this article? Submit your own.To report a factual error in this article, click here