Garmin (NASDAQ:GRMN) recently closed the books on a strong fiscal 2018 that marked its third straight year of rising revenue and improving profitability. That would be a notable result for any consumer electronics specialist, but it’s especially impressive considering Garmin had to adapt to big consumer demand shifts in fitness trackers and automotive GPS devices.

Here’s a look at a few standout metrics that help describe just how well the business fared over the past 12 months. 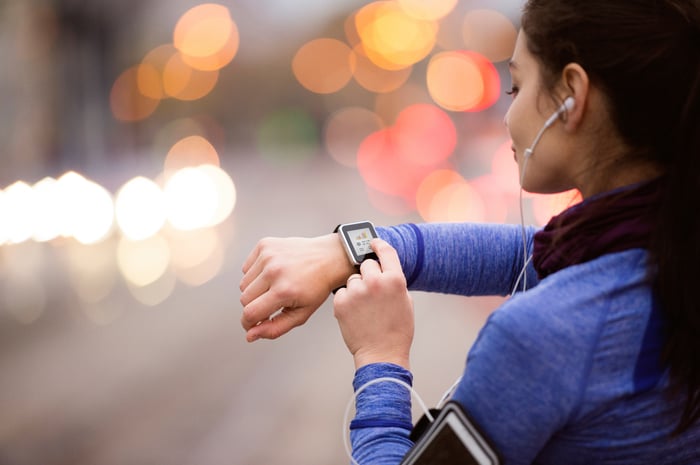 Garmin shipped 15 million units of GPS device products in 2018 and landed at 7% sales growth for the year. That’s nearly double the expansion rate CEO Cliff Pemble had targeted at the start of 2018. A strong holiday season has now pushed Garmin ahead of its updated revenue forecasts in each of the last two years.

95%: Earnings from segments other than automotive

The automotive segment, which in 2015 accounted for one-quarter of operating income, has faded in relevance as the company bulked up its offerings in areas like fitness tracking, hiking smartwatches, and aviation navigators.

Profits came almost entirely from these other divisions last year, and that fact reduced the financial sting from the auto segment’s 19% sales decline.

25%: Sales boost in the outdoor division

Garmin’s outdoor segment is home to the Fenix smartwatch franchise along with several other popular brands. A steady drumbeat of iterative product launches allowed the company to easily adapt as consumers shifted their demand away from low-priced fitness trackers last year. That helped the outdoor unit finish with a 16% increase in both sales and bottom-line profits.

Operating margin improved for the third straight year, thanks in part to a third consecutive annual boost in gross margin. These figures show that Garmin is doing many things right lately. But two of its biggest achievements have been releasing in-demand consumer products and tilting its sales base toward high-margin niches like aviation. That segment enjoyed 75% gross profitability and 34% operating profitability last year. It was also the company’s fastest-growing division.

Garmin spent a bit more on capital investments in 2018 than it did the prior year. However, robust operating cash flow allowed free cash to shoot up by $243 million to reach $764 million. This success likely contributed to management’s decision to increase the company’s annual dividend payment by 8%.

The company is predicting sales gains of around 5% this year as revenue reaches $3.5 billion — up from $3 billion in 2016. Management’s projections also call for gross and operating margins to inch higher for the fourth consecutive year. Embedded in that forecast is the assumption that Garmin will continue to flex its design, marketing, and pricing muscles in key categories like smartwatches while diving deeper into the relatively untapped aviation market.

A brighter consumer spending environment might land actual results significantly higher on both the top and bottom lines. However, as in the past two years, investors will likely only have hints of that outperformance to rely on until Garmin releases its final holiday-quarter results in early 2020.