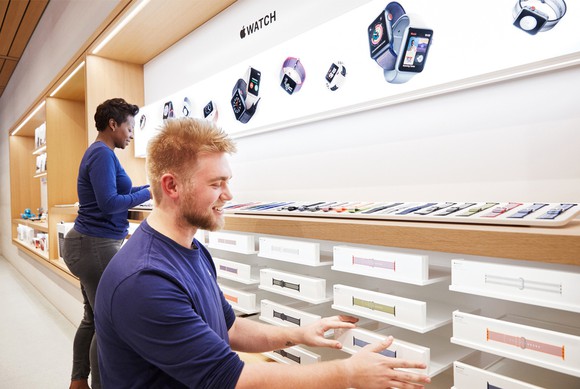 Here are four key takeaways from the call.

In Apple’s second-quarter conference call, CFO Luca Maestri pointed to its wearables as the primary driver for this segment’s growth.

Dividend investors can count on Apple

Along with its second-quarter results, Apple also announced a 16% increase to its quarterly dividend. The increase extends the company’s growing history of dividend increases, giving investors looking for income from Apple stock more reason than ever to bet on the tech giant as a dividend stock.

Apple has now increased its dividend six times in less than six years. But there’s plenty more to come.

Up 31% year over year, Apple’s services revenue isn’t growing as fast as its other products segment. However, the segment accounted for 15% of Apple’s fiscal second-quarter revenue, easily making it the company’s second-largest segment after iPhone. Given the servicesconsistently fast-growing revenue and its importance to Apple’s overall business, investors are unsurprisingly watching the segment closely.

Across all our services, paid subscriptions surpassed 270 million, up over 100 million from a year ago, and up 30 million in the last 90 days alone, contributing to the overall increase in services revenue.

Given recent developments surrounding a possible U.S.-China trade war,Apple investors may be wondering how this could affect the tech giant’s business. After all, of Apple’s second-quarter revenue, 21% was in the company’s Greater China segment.

I’m actually very optimistic. I think history shows us that countries that embrace openness and diversity do much, much better than the ones that are closed. And so, I’m a big believer that the two countries together can both win and grow the pie, not just allocate it differently. And so, that’s our focus, and I’m optimistic that — I don’t know every play by play that will happen, but over time, I think that view will prevail.

While a U.S-China trade war could put some pressure on Apple’s gross margin, making it a development at least worth keeping an eye on, this isn’t something investors should be worrying about. Broad-based growth across Apple’s business, a healthy balance sheet, and a conservative valuation make this a small risk in the grand scheme of Apple’s overall business.