Video processor maker Ambarella (NASDAQ:AMBA) was once a red-hot stock, thanks in large part to its position as a key chip supplier in GoPro (NASDAQ:GPRO) action cameras. Unfortunately for Ambarella, GoPro’s success was relatively short-lived, and on top of that, GoPro ultimately designed Ambarella out of future products. During the company’s most recent earnings call, Ambarella CFO Casey Eichler said that “GoPro continued to be immaterial in the current quarter.”

Although Ambarella’s business is no longer dependent on GoPro, removing that particular risk to the business, there are other risks investors should be aware of before investing in the company’s stock. Here are three important ones. 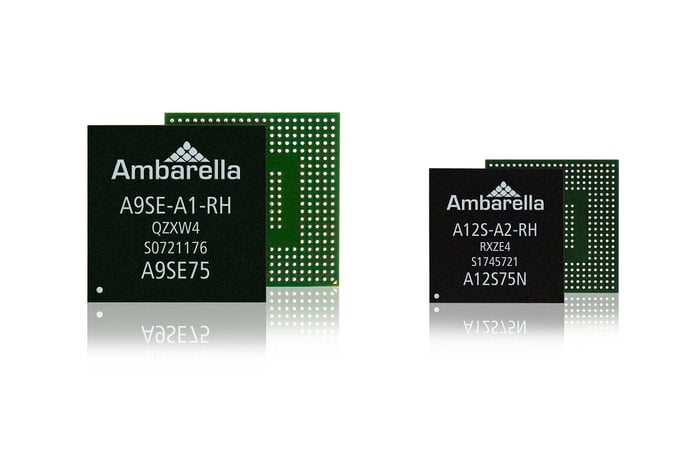 In Ambarella’s most recent quarterly filing, the company says it expects “competition to increase in the future, which could have an adverse effect on our revenue and market share.”

Drilling down into that a bit more, the company explains that it expects “competition to increase and intensify as more and larger semiconductor companies enter our markets.”

The company concedes that in the wearable sports camera market, its main competitors “are vertically integrated divisions of camera device OEMs,” which it goes on to list.

The risk here is significant, with the idea being that the most successful sports camera makers will have the wherewithal and the business incentive to build their own chips to differentiate their cameras, leaving Ambarella with both fewer customers due to that vertical integration as well as potentially weaker customers (since those customers need to rely on third-party chip makers).

In the IP security markets as well as automotive camera markets, Ambarella cites many merchant chip makers as competition, although it also concedes that each segment does have vertically integrated players.

And, finally, Ambarella points out that there are companies that license out key intellectual properties to enable their customers to build chips competitive with Ambarella’s. This, Ambarella says, “potentially enables a greater number of competitors to offer competitive solutions.”

So, the key takeaway is this: Ambarella has a lot of competition.

Ambarella lists as another risk factor the following: “Our target markets may not grow or develop as we currently expect and are subject to market risks, any of which could harm our business, revenue and operating results.”

The company does have exposure to a number of interesting markets, with Ambarella CEO Fermi Wang explaining on the company’s most recent earnings call that the company’s “resource allocation remains heavily focused on computer vision opportunity [sic] in surveillance, automotive and other computer vision related applications.”

However, there are some areas where the company is facing real challenges. For example, in an explanation of the above risk factor, Ambarella itself claims that it has “recently experienced declines in demand for our solutions in several consumer camera markets, including wearable cameras, virtual reality cameras and UAVs, which we expect will continue through at least the end of fiscal year 2019.”

Ambarella is a pricey stock

Over the last three quarters, Ambarella has generated $176.7 million in revenue. Although the company’s gross profit margin profile is actually quite robust, coming in at about 60.8% over that time, the company’s operating expenses relative to its revenue are still quite high.

On a non-GAAP basis — that is, excluding stock-based compensation — the company generated positive earnings per share (EPS) of $0.59, but even on that basis, the company’s earnings power right now doesn’t look particularly strong.

Indeed, even on that non-GAAP basis, analysts expect the company to close out fiscal 2019 having generated $0.64 per share, and then for EPS to decline further to $0.45.

For some perspective, this means Ambarella trades at 63.5 times expected fiscal-year 2019 EPS and more than 90 times fiscal 2020 estimates.

Investors shouldn’t necessarily dismiss stocks simply because they’re expensive, but in this case, Ambarella’s EPS is set to be down substantially in fiscal 2019, and things look like they’ll only get worse in fiscal 2020. The company isn’t even growing that quickly, with revenue expected to decline 22.9% in fiscal 2019 and then rise just 4.9% in the following year.

Ambarella is a pricey stock without the momentum in its fundamentals to justify its current price, let alone a higher one. What this could mean, then, is that in a worse overall stock market, stocks like Ambarella might be among the first ones investors dump as they flock to companies with significantly better fundamentals and cheaper valuations.