To err is human, especially on the financial front. We all make money-related mistakes we wind up regretting later, but some blunders have longer-lasting effects than others. Here are three mistakes that might seriously upend your finances for life, so consider yourself warned.

Credit card debt is bad news for a couple of reasons, the most immediately detrimental being the cruel cycle of accrued interest you might struggle to break free from once you’re in it. For each day that you carry a credit card balance, you’ll accumulate interest on your unpaid bill so that you’re constantly adding to that total. Carry it long enough, and you might never catch up.

Even if you do manage to dig out of that hole, if you carry a credit card balance for a lengthy period of time, your initial debt will end up costing you far more than its original sum. Imagine you rack up a $5,000 balance on a credit card charging 24% interest that you proceed to carry for five years. After all is said and done, you’ll end up having paid a total of $8,630 for whatever it is you bought in the first place. That’s over $3,600 in wasted money. 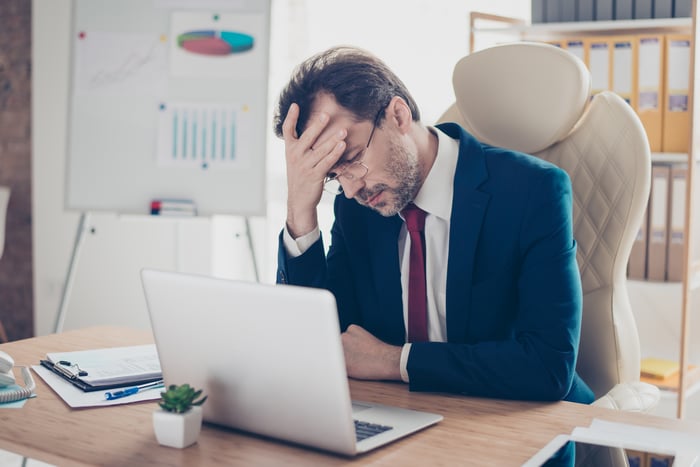 Another problem with carrying credit card debt? It can bring down your credit score, thereby making it harder for you to get a mortgage, car loan, or even a job.

Rather than run that risk, pledge to never charge more on your credit card than you can afford to pay off by month’s end. At the same time, save up at least three months’ worth of living expenses for emergencies so that if an unplanned bill hits you out of nowhere, you won’t have to run up a credit card balance to cover it.

Many folks have no choice but to take out loans to pay for college. But there comes a point where too much student debt could wind up haunting you well into your 40s, 50s, or even beyond.

For one thing, the more educational debt you rack up, the longer it’ll take you to pay it off. Along the way, you might miss out on or be forced to delay a number of key financial goals, whether it’s buying a home or saving for retirement. In fact, homeownership among Americans in their 20s and 30s is around a 30-year low, and we can thank excessive student loan balances for that statistic.

Rather than rack up a fortune of debt in pursuit of a diploma, aim to keep your college costs as low as possible so that your borrowing is minimal. Opting for an in-state, four-year public college over a private one, for example, could easily shave $100,000 off your total higher-ed bill, thereby allowing you to graduate at a fraction of the cost as some of your peers.

When you need money in a pinch and don’t have it in savings, your natural inclination might be to take an early withdrawal from your IRA or 401(k). After all, that money is yours, so why not use it?

The problem, however, is that most of the time, removing funds from a traditional IRA or 401(k) before age 59 1/2 means losing 10% of your withdrawal as a penalty right off the bat. That’s money you’ll never get back. Furthermore, when you remove a lump sum from your retirement plan, you’re left with that much less for your golden years. You also lose out on growth on that sum, which could prove even more detrimental.

Let’s imagine you take a $10,000 withdrawal from your IRA at age 30 to cover a home repair. If your investments normally generate an average annual 7% return, and you retire at 67, then over the course of those 37 years, you’ll actually lose out on a total of $122,000 when you take growth on that $10,000 into account. And that could spell the difference between having adequate income in retirement or falling short.

A better bet? Explore different funding options. Though a personal loan might not be the ideal solution, it might make more sense than an early retirement plan withdrawal, especially if you qualify for a favorable interest rate. A home equity loan might also be a reasonable solution if you’re a property owner and qualify. Either way, think twice before making an early retirement plan withdrawal, because you stand to lose out in more ways than one.

Some financial mistakes are easy to recover from. Others, not so much. Avoid these three like the plague, and you’ll have less to regret down the line.