The country has added jobs for 86 consecutive months — the longest streak on record — according to the Labor Department. Its numbers date back to 1939.

The unemployment rate has ticked down to 4.1%, the lowest level since 2000. Compare that to 10%, which it reached in October 2009, when the economy was in shambles. Experts say that the current low rate shows it won’t get much better than this.

“The overwhelming evidence from the labor market is that the economy is, in fact, at full employment,” says David Kelly, chief global strategist at JPMorgan Funds.

Americans seem to be shedding some recession scars. Consumer confidence is near its highest level in 17 years, fueled by a strong job market and the Republicans’ long-anticipated tax reform plan, which was signed into law last week.

And jobless claims have reached their lowest level this year since 1973. The labor force was much smaller back then. 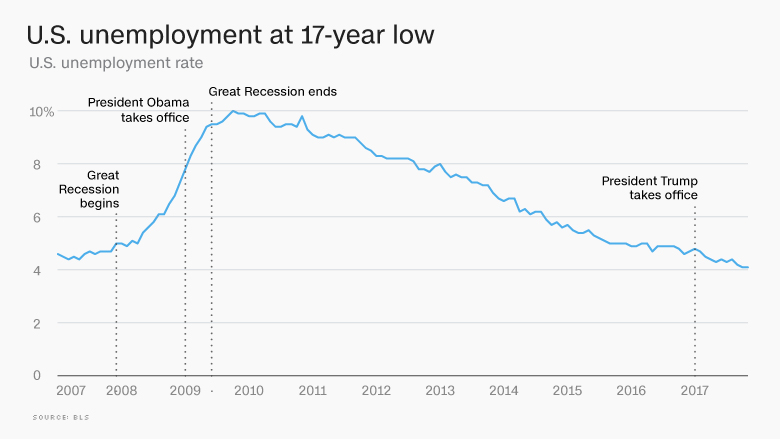 Another sign of confidence: Workers are changing jobs at a record level. About 27% of private sector employees switched jobs this year, the highest level ever, according to the ADP Research Institute, a branch of the payment processor.

That makes sense — there are 6 million job openings right now, which is just below the all-time high set earlier this year. Employees have plenty of options.

Brandon, a journalist in Alabama, could be switching jobs soon. He told CNNMoney that he is interviewing at a local TV station after the parent company at his magazine job was sold from one conglomerate to another.

For Brandon, 27, sticking around in his current job means that his health insurance co-pay would skyrocket from $140 per month to $490 because of a change in the insurance provided under the new ownership. He said he’s optimistic about his job prospects; his wife was hired recently at a hospital.

But he also sees the last few months — his office’s corporate transition included layoffs — as the ugly side of a churning economy.

“I think the economy is looking pretty good in the hiring aspect — there are jobs out there.” said Brandon, who requested that his full name not be used while he’s interviewing for another job. But at his company, “we’ve had some ups and downs the last year and it’s hard to be positive.”

The economy showed resilience this year in the face of a historic hurricane season, political turbulence and time itself: Economic expansions usually don’t last this long. The U.S. economy has grown, albeit slowly, for eight and a half years straight. It’s the third longest streak in history behind expansions in the 1960s and 1990s.

So far this year, American companies have added 1.9 million jobs. That’s lower than last year’s gain of 2.1 million over the same period, but it’s still a solid pace.

Usually when unemployment is low, job growth slows to a standstill, but that hasn’t happened yet. A healthier global economy and weaker U.S. dollar have also helped the U.S., boosting American exports. 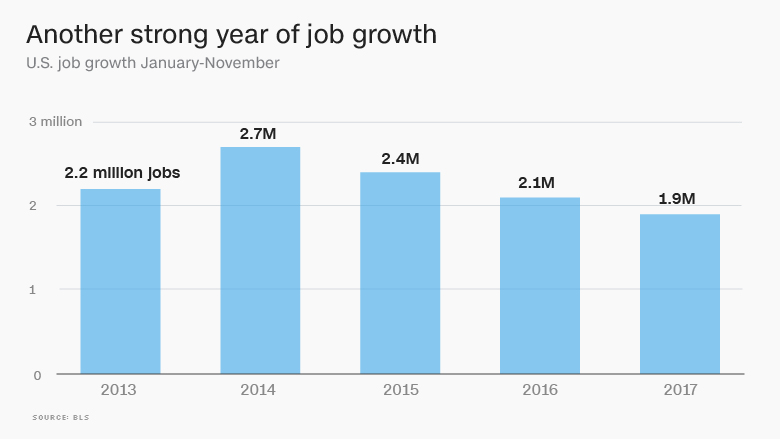 Job gains, meanwhile, have come across the board. Construction added 172,00 jobs; manufacturing 171,000; financial services 128,000; transportation 96,000; and health care 267,500, according to the Labor Department’s figures from January to November.

Even mining, after two years of significant job losses across the entire industry, has regained nearly 63,000 jobs.

But just like Taylor Swift’s album, the economy has weak spots too. (Be honest, you don’t listen to every song on the album.)

Wage growth is moving at a glacial pace: 2.5%. The Federal Reserve wants it to reach 3.5%. The slow pace of wage growth is one key reason why many Americans feel left out of the economy’s recovery from the Great Recession. Although wages are rising, more than half of Americans say they’re falling behind on their cost of living, according to a Pew Research survey.

The 6 million job openings are also a mix of good and bad news. It’s good because employers are clearly hiring, and there’s plenty of churn in the workplace. The bad news is that employers increasingly say they can’t find skilled workers at the price they’re willing to pay.

To train or not to train

Peter Thomas is one of those employers. He runs GCThomas, a business in San Diego that serves as a bridge between construction projects and manufacturing companies that produce industrial equipment and building materials.

“It’s difficult for me as an owner to say, ‘OK, I want to finance the bridge of this gap between training and realizing profits,'” said Thomas, 34. He knows he’s losing out on business. But for now, the cost of training someone is too much to justify.

Still, Thomas said 2017 has been a good year for the firm. It’s certainly much better than when the business caved in 2010. Thomas added that that he’d take the struggle to find another qualified employee over the challenges he faced after the recession.

But it’s a different situation for Bill Priemer, CEO of Hyland Software, a tech firm just outside of Cleveland in Westlake, Ohio.

Priemer said he knows his hometown is not a “software Mecca.” So he had no choice but to make an investment in the pipeline of skilled workers. He worked with local universities to coordinate the computer science curriculum a decade ago. His company also provides a few scholarships at local colleges for students who focus on software programming dedicated to the health care industry.

It has paid dividends. Hyland plans to have 120 paid interns next summer, and last year 93% of the interns who worked in research and development were offered full-time jobs after their summer gig.

“We don’t have a problem finding people to fill our open roles,” says Priemer, who employs 1,800 people in Cleveland, the company’s R&D center, and 3,000 worldwide. “To get the resources we needed, we were just going to have to bite the bullet and make the investment, hire for potential and train.”

Some say wages, not job skills, are the culprit. But the future looks bright overall

Some economists say that training is great, but that low wages are the real reason why employers can’t find workers. They argue that bosses need to raise salaries or lower application requirements if they’re truly desperate to find good employees.

Still, these are relatively bearable problems. During the height of the recession, there were only 2.2 million job openings, which was entirely bad news for workers. America has 6.6 million unemployed workers today actively looking for jobs. Eight years ago there were more than 15 million people out of work.

“We expect that the job market will remain strong in the years ahead,” outgoing Federal Reserve Chair Janet Yellen said at her final press conference earlier this month. The Fed raised rates three times this year, a sign of an improving economy.

Taylor Swift herself will give the job market a small boost in 2018, by the way. Her nationwide tour kicks off in May, and it will undoubtedly help support jobs — dancers, stage crew, security, food vendors, merchandisers, waiters, cooks — in and around the stadiums where she performs.