The Dow Jones Industrial Average is down today more than 500 points (2.35%), which is not a promising way to start the second quarter of 2018.

While the drop was unpredictable, we’ve rounded up the two biggest reasons for today’s sell-off on Wall Street, so you know what’s going on. 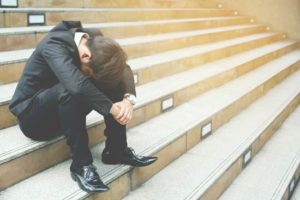 And if things get worse, we even have a strategy to protect yourself…

On April 1, China announced that tariffs on roughly $3 billion worth of U.S. imports would go into effect today (April 2).

The tariffs are on 128 products, including pork, fruit, and steel pipes.

This is a retaliation for U.S. President Donald Trump announcing plans on March 22 to place tariffs on $50 billion worth of Chinese imports.

You Must Act Now: America is headed for an economic disaster bigger than anything since the Great Depression. If you lost out when the markets crashed in 2008, then you are going to want to see this special presentation…

President Trump is trying to curb China’s theft of intellectual property, which costs American businesses between $225 billion and $600 billion annually, according to the United States Trade Representative.

The uncertainty of how these tariffs will affect stocks led to the sell-off, but it’s not the only reason the Dow Jones Industrial Average is dropping today…

The recent spat with Amazon has investors concerned the president could favor imposing new taxes on Amazon or pushing for the Post Office to charge more to deliver Amazon’s packages. 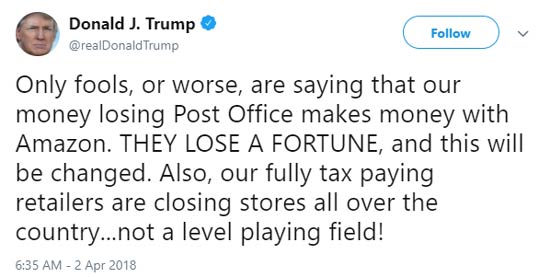 On March 31, POTUS tweeted the U.S. Post Office loses $1.50 on average for each package it delivers for Amazon. An April 2017 estimate from Citigroup found if costs were fairly allocated, Amazon should be paying $1.46 more per delivery, according to The Wall Street Journal.

Amazon prices were down almost 4% as of noon today, and other tech stocks followed AMZN lower.

The AMZN stock price helped lead the entire Nasdaq to a 2% drop.

While a single-day decline in the Dow is not a reason to panic, today’s troubling events show just how quickly stocks can fall, and why investors always need to be prepared.

And while stocks have been turbulent lately, it’s nothing compared to what a real crash could do to your money…

America is headed for an economic disaster bigger than anything since the Great Depression.

If you lost out when the markets crashed in 2008, then you are going to want to see this special presentation.

Because if you don’t act soon, the effects on your financial future could be more severe than anything you have ever experienced.